Posted on May 7, 2019 Posted By: Publisher Categories: Posts EN 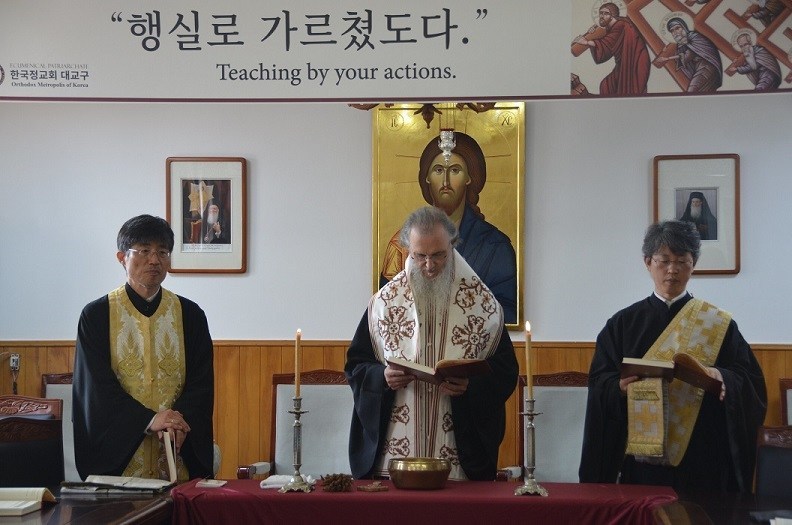 As published to the news website ”The Orthodox World”

While we were preparing for the Divine Liturgy on Holy Thursday morning at St. Nicholas Cathedral in Seoul, we received an unlikely phone call from the Patriarchate of Moscow.

On the other line, there was a Metropolitan, rigorously defending the “regularity” of the positions of the Moscow Patriarchate and condemning the alleged “irregularities” of the Ecumenical Patriarchate regarding the Ukrainian issue. He spoke with anger and in a loud voice, criticizing the priest of the Orthodox Metropolis of Korea who is serving the local slavophone community for not having sent any money yet “for the support of the deprived and persecuted Ukrainians” who belong to the Patriarchate of Moscow!

Our priest was dumbfounded. He attempted to articulate a word, but the defender of the rights of the Moscow Patriarchate raised his voice even more. He asked our priest to admit his error and his disobedience to the orders to collect money among the Orthodox Christians in Korea and to send financial assistance directly to the “wounded” faithful of the Ukrainian Church, which is under the Moscow Patriarchate.

Finally, when our Priest was able to explain to him (to the Metropolitan) that he was calling the wrong person, and that he (the priest) was not his subordinate, since he belonged to the Ecumenical Patriarchate, then the Metropolitan abruptly hang up the phone. Obviously, he had made a mistake and one would expect, at least, a simple apology. Unfortunately, such courtesies are incomprehensible to people who have dedicated themselves to serve secular interests; who vigorously and with blind subservience follow the orders and uncritically defend the interests of their bosses.

So, without realizing it, they revealed themselves, thus fulfilling the ancient saying: “When God plans harm against a man, he first damages his mind.” They have revealed that they are carrying out international fundraising to support those who are scheming against the Ecumenical Patriarchate. Their “error” helps us to understand better how they persuaded their clergy to refuse to attend and be candidates at the Unifying Synod for the election of a Hierarch leader of the Autocephalous Church of Ukraine.

Unfortunately, the “thirty pieces of silver” once again blind and buy conscience. And those entangled in the game of scheming usually resort to mud-slinging against the non-involved. That is why they have rapidly spread the “fake news” that Poroshenko has bought the Ecumenical Patriarch’s decision with a large sum of money in order to grant Autocephaly to the Church of Ukraine. However, His All-Holiness Ecumenical Patriarch Bartholomew, with his clever humor, reduced the mud-slingers to silence by a simple gesture: offering to the children, who visited him in order to sing Christmas carols, the chocolates he had received as a “big bribe” from Poroshenko!

Let us hope and pray that, on the one hand, buying people’s consciences will stop and that, on the other hand, people will stop losing their dignity and placing themselves by the side of the lawless Judas, who “was unwilling to understand.”